Michigan resident, Sarah Deming, is suing her local multiplex and the distributors of Ryan Gosling-starrer Drive.

Deming says the movie was promoted “as very similar to the Fast and Furious, or similar, series of movies” but actually “bore very little similarity to a chase or race action film, having very little driving in the motion picture”. She also claims that

and hopes that anyone who feels the same way will join her in a class-action suit. She’s seeking the price of her ticket and further damages.

There have been many rumblings about the way Drive was marketed prior to this lawsuit. The movie itself doesn’t have any identity problems. It’s an extremely violent, Euro arthouse flick from beginning to end. However, it was shot within the Hollywood system and contains many Hollywood stars – who all love to play against type given the opportunity – and has to earn its nut at the box office. This always creates a headache for the marketing department who have to ask “How do we reach the biggest possible audience for this movie?” rather than “Who is the best audience for this movie?”.

Thomas Rogers, movie critic and editor at Salon.com, was

“…fascinated by the target demographic of the movie — like, who’s supposed to see it in the first place? There are people who are going to see it because of Ryan Gosling, but I feel like the normal Ryan Gosling audience isn’t all that fond of seeing someone stomp people to death. The movie has these gay movie references — mostly to Kenneth Anger’s underground film “Scorpio Rising” — but there’s really nothing overtly gay about it. The title sequence has this campy 1980s lettering, which is duplicated in the film’s ad campaign — and a hilarious, awesome fake-’80s synth score — which makes it seem like it might have a romance or comedy element to it. But the film’s only sex scene involves two people touching a stick shift, and there’s probably only one joke in it. I think, basically, this movie manages to frustrate everybody’s expectations of it — to its great credit.

By attempting to broaden the target audience (including Ryan Gosling fans, Fast and Furious Fans, crime caper fans, even Mad Men fans thanks to the presence of Christina Hendricks) the studio ended up disappointing a lot of people and generating some horrible word of mouth. That’s the kiss of death in today’s Twitter-driven marketplace. And now it’s generated a lawsuit.

Whether Deming’s case ultimately gets dismissed as frivolous, or settled out of court just so it will go away, remains to be seen. However, it does raise some interesting issues about what audiences feel they are being duped into by the Hollywood machine.

For decades, movie trailers have attempted to make bad acting and story-telling look palatable, cherry-picking the six good moments from an absolute bomb in order to lure an audience into going to see it. Is this artistic licence, or classic bait-and-switch? Do movie-goers have a duty to inform themselves about the actual content of a film (Sarah Deming could have saved herself a lot of time and trouble by reading some of the advance reviews of Drive online) or do they have a right to expect that the general marketing honestly represents what they are about to see? 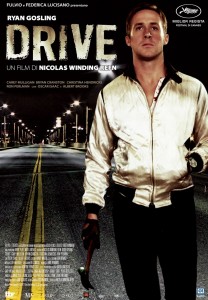 Are US audiences so infantilised by the constant stream of superheroes and aliens and fighting robots that they are unable to deal with human-on-human violence as part of a fictional story? The Italian poster for Drive (see right) makes no bones about the tone of the movie. Like the US version (top), it features Ryan Gosling, but shows him striding purposefully along a dark road, (bloodstained?) hammer in hand, murder in his eyes, NOT looking dreamy behind a wheel. Was this so unacceptable to Gosling fans entranced by his recent performance in Crazy, Stupid, Love? Was it fair to lure them into watching Drive anyway?

The furore also raises questions about why the kind of easy, casual violence and prejudice that runs rampant in summer blockbusters is acceptable to mainstream US audiences, whereas the one-on-one gritty and realistic violence depicted in Drive is not. The body count of Transformers: Dark of the Moon was way higher than Drive‘s, but Michael Bay glosses over deaths as collateral damage, the inevitable consequence of a thrilling action scene, nothing anyone in the audience has to deal with emotionally or viscerally. The potentially negative impact of the racism represented by Mudflaps and Skids in Transformers 2 far surpasses any of the anti-semitic snarls of the hoods in Drive (clue: one movie is aimed at children still forming their view of the world, one is not).

No one’s bringing a class action suit against Michael Bay and his corporate paymasters, Hasbro and Paramount. Perhaps Deming and her attorneys should be litigating against more culpable targets?

Watch the Drive trailer for yourself:

The Drive Backlash: Too violent, too arty or both? – Salon
Detroit Woman Sues “Drive” Film-makers– Click On Detroit
My “Drive” review – Planet Fury